The Fool's Journey is a storytelling game based on a deck of tarot cards. Nine of the Major Arcana cards form a story waiting to be told. Bid against the other players to rearrange the cards into the story you want. Then use the cards as prompts to tell the tale of the Fool (or another character). Try the game with different tarot decks for different stories and different experiences. There is no end to the stories waiting in The Fool's Journey.

All you need to play is this instruction book, two to four players, a bunch of 6-sided dice, and any deck of tarot cards.

In order to download this game you must purchase it at or above the minimum price of $5 USD. You will get access to the following files:

The Fool's Journey has probably my favorite cover on any trpg. It's simple, but it communicates its contents to the reader perfectly, and it sets a whimsical tone for the game itself.

The game itself is 14 pages, 2--4 player, and tarot and dice based. It also feels a little similarly to Baron Munchhausen, in that there's technically victory points, but the real goal is just to tell cool stories with each other.

Despite this, the mechanics are a little complicated, and while at the end it works out to "tell a story about the major arcana that are on the table", you go through a bunch of steps to get to that point. There's bidding in stages to determine the order of the major arcana on the story track, and there's dice rolls to determine who tells their story first. For groups in a hurry, or who are looking for a warmup game, this can be truncated, and you can just skip to the final phase of the game. For groups that are more competitive, you can deep-dive into the mechanics, but there aren't clear rules for who wins. You could vote, but it's probably safer not to treat this as a competitive game.

Then again, another option might be to secretly assign each player two objectives ("make sure the chariot and the fool are adjacent, make sure the star is on the track, etc") and have them declare they win if their objectives are complete.

Either way, alongside its rules, Fool's Journey does come with several short stories, all built with the engine of the game, and they're all cool. I think there's definitely also a niche here for using Fool's Journey as a single-person short story prompt, although the book doesn't explicitly suggest this.

Overall, Fool's Journey is a cool, casual, improvised storytelling game. If you like Munchhausen, Once Upon A Time, or other games in that style, I would recommend checking it out. 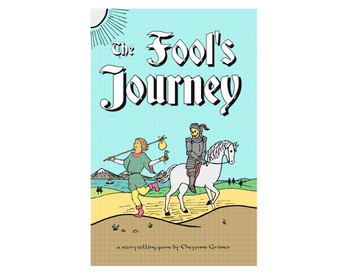